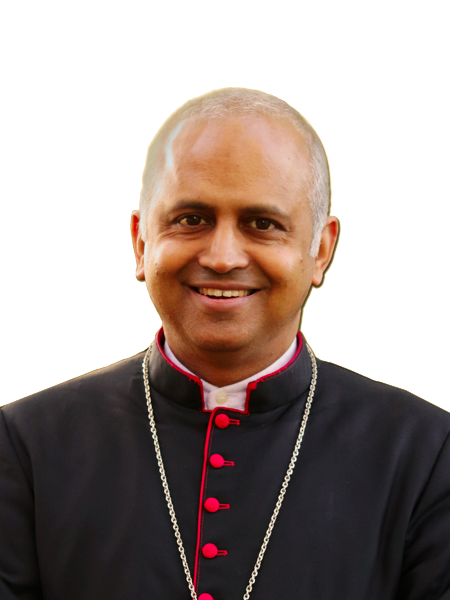 Mar Joseph Srampickal was born on 11th August, 1967 as the fourth son of late Mathai Srampickal and Aleykutty Mathew. After completing his postgraduate studies (M.A. Political Science) and teacher training (B.Ed.) he joined Good Shepherd Minor Seminary Karoor on 1st June, 1992. He had his ecclesiastical studies at Paurasthya Vidhyapitham, Vadavathoor (B.Ph.) and at Urban University Rome (B. Th. and Licentiate in Biblical Theology). He was ordained on 12th August, 2000. Mar Srampickal studied at the University of Oxford, England, UK (2001) and got his Masters in Oriental Theology (M.S.T). In 2002 he received his Master’s in Education (M.Ed) from Mangalore University, Karnataka. He is proficient in Italian, English, German and Malayalam.
He assisted the Vicar, St. Alphonsa Parish, Mangalore, Karnataka, India (Diocese of Belthangady) between 2001-2002. He was formator at Good Shepherd Minor Seminary, Palai, for two years (2002-2004) and at Mar Ephrem Formation Centre, Palai, Kerala, India (2010). He served as the spiritual father at Mar Sleeva College of Nursing and Mar Sleeva Students’ Hostel, Cherpumkal, Palai, Kerala, India. (2005-2010). He was the Director of Evangelisation Programmes and Basic Christian Communities and prayer houses at Narianganam & Maridom of the Diocese of Palai. (2010-2012). During these years Mar Srampickal also served as the diocesan Animator of Charismatic Movement and Jesus Youth Movement in the diocese. He is the founder director of Mount Nebo Theological Study Centre, Vagamon started in 2012. He was the Master of Ceremony for the Episcopal Consecration of Mar Joseph Kallarangatt, Bishop of the Diocese of Palai on 2nd May, 2004 and for the Episcopal Consecration of Mar Jacob Muricken, Auxiliary Bishop of the Diocese of Palai on 1st October, 2012. He served as the Secretary to Bishop of the Diocese of Palai during 2012 – 2013. He became the Vicar of St. George’s Church, Urulikunnam, his home parish in 2013.
LETTERSCIRCULAR
Mar Srampickal was a Lecturer of Philosophy and Education, St. Thomas College of Teacher Education, Palai, Kerala India. (2004-2005). He also taught Bible, English and Political Science in the Good Shepherd Minor Seminary, Palai (2002-2004) and in the Mar Ephrem Formation Centre, Palai, Kerala, India (2010). In 2003, he taught Oriental Theology at Benedictine Monastery, Kappad and took classes of Religion, Morals and Values at Mar Sleeva College of Nursing, Cherpumkal during 2005-2010.

He is the Founder Director, Mar Sleeva College of Nursing and Mar Sleeva Students’ Hostel, Cherpumkal, Palai (2005-2010). He served as the Secretary of the Palai Diocesan Medical Education Trust. (2005-2013). He was the General Convener of the 28th & 29th Diocesan Bible Convention, Bharanganam, Kerala (2010 & 2011). Mar Srampickal was the Publicity Committee Chairman for the Missionary Meet of the Diocese of Palai held at Ramapuram on 30th April, 2012 and the Chairman, Publicity Committee for the 30th Bible Convention of the Diocese of Palai held at Bharananganam from 19th to 23rd December, 2012. He became the Spokesman of the Diocese of Palai (2012-2013). He was the Vice-Rector of Collegio Urbano De Propaganda Fide, Rome, Italy from 1st September, 2013 until he got the new mission to become the first Bishop of the Syro-Malabar Eparchy of Great Britain. Bishop Joseph has travelled extensively in Europe and the Middle East.
COPYRIGHT @ 2021 | SYRO-MALABAR EPARCHY OF GREAT BRITAIN